A new unit that San Francisco police created to curb prostitution and other street crimes in the Mission District is facing opposition from advocates concerned that the effort is driving sex workers into harm’s way.

Mission Police Station Capt. Gaetano Caltagirone formed the Crime Abatement Unit in August to fight crimes including street prostitution and auto burglaries in response to numerous complaints from neighbors, according to police.

Police spokesperson Sgt. Michael Andraychak said the unit, which is also known as the Sex Workers Abatement Unit, is focused on arresting pimps and johns while offering services and aid to sex workers on the streets.

But advocates who rallied outside Mission Police Station on Monday said the effort has resulted in an uptick in the number of sex workers who have been arrested in the Mission.

Rachel West of the U.S. PROStitutes Collective told reporters that the unit has created a hostile environment where “women are forced into more isolated, unfamiliar areas where attacks are more likely.”

“Arrests have increased dramatically and noticeably, and as a result sex workers who are victims of violence are intimidated and running from police,” West said.

West argued that the unit undermines a police policy from last December that prevents sex workers who are the victims of certain crimes from being arrested for performing sex work. The policy recognizes that “the criminalization of sex work is one of the primary barriers to reporting violence to law enforcement.”

Andraychak did not provide the number of arrests made by Mission Police Station related to sex work. Caltagirone did not respond to a request for comment.

But Supervisor Hillary Ronen, who represents the Mission on the Board of Supervisors, told the San Francisco Examiner that she supports the police arresting pimps and johns.

“Every time I’ve talked to the captain, his intention is not to target sex workers but to target pimps,” Ronen said. “If that’s not happening, I want to learn about it.”

Ronen said she supports the police unit so long as The City does not have sufficient services for sex workers. Last year, she spearheaded an effort for St. James Infirmary to provide services to sex workers from a van on Capp Street.

While not all sex workers are trafficked, the increase is reflected in the number of human trafficking cases reported to police in San Francisco so far this year. As of the end of October, the citywide number jumped from 33 last year to 98 this year.

Mission Police Station, which recorded three cases through October 2017, had 15 cases in the same time this year, according to police crime data. 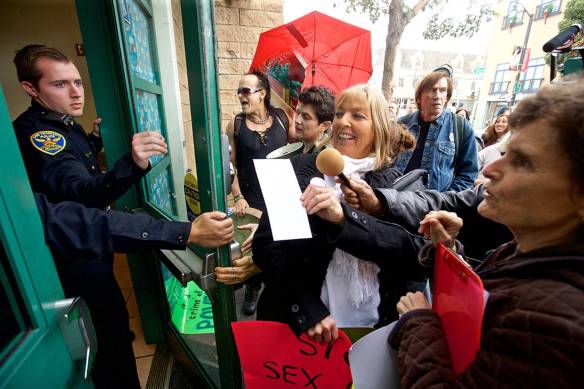